Red Roses head coach Simon Middleton has named his starting XV ahead of England’s final game of the 2018 Six Nations against Ireland this evening at Ricoh Arena (KO 5:30pm)

England require a bonus-point win in Coventry and will rely upon rivals Wales beating France, Middleton’s side are reliant on Les Bleus not securing a bonus-point if they are defeated in Wales.

France head to Wales on Friday night looking for a Grand Slam that would wrap up the Women’s Six Nations title and a glorious campaign for Les Bleus.

Middleton has made four changes to the starting lineup that were defeated by France 18-17 in Stade des Alpes on Saturday night.

Wing Kelly Smith, scrum-half Caity Mattinson, Lagi Tuima and Poppy Cleall all come in as reinforcements as England look to react to their latest defeat. 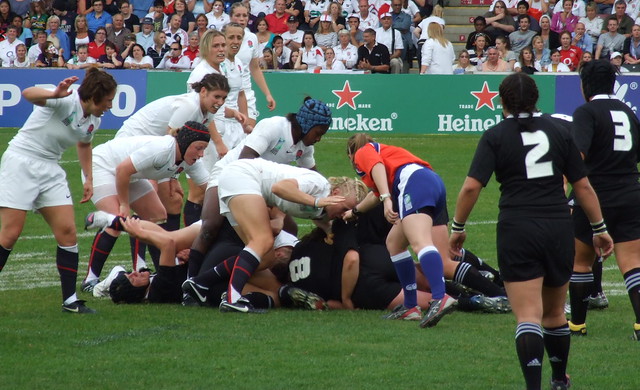 Simon Middleton told England Rugby: “We fully expect the game against Ireland to be a tough, yet exciting encounter, they are a dangerous side, who will be looking to bounce back after their defeat by Scotland last week,” said Middleton.

“We are really looking forward to playing them at the Ricoh on Friday night in front of a bumper crowd.

“We have made changes across the starting 15, with new combinations in the forwards and the backs. We have depth in the EPS squad and are confident that the players coming in will relish the opportunity to showcase their talents in the Six Nations, one of the flagship competitions in the women’s game.

“We are determined to come away with the win on Friday night.”

Balding to leave Cinderford; off to Moseley

Former Gloucester captain Adam Balding has stood down as Cinderford head coach and will join National One rivals Birmingham Moseley as director of rugby. Balding had been with the Foresters for the last three-and-a-half years but has decided to move into a full-time role. Cinderford will now have to go through a coaching restructure for […]

Gloucester Rugby have lost their fourth straight Premiership game on Saturday, falling 24-20 against in-form London Irish at the Madejski Stadium. The Cherry and Whites took an early lead through a Billy Twelvetrees penalty but four tries from Ollie Hassell-Collins proved too much as the game finished 24-20. Gloucester remain without Willi Heinz and Callum […]

England Women have recently named squads for their two National Academy fixtures this month and the U20 squad for the 2018/19 season. Gloucester-Hartpury’s Sasha Acheson, Millie Wood and Ellie Underwood have been selected for the National development fixtures. For the U20 squad; Iona Antwis, Shauna Bennett, Tabs Copson, Connie Powell and Emma Sing have all been named. Acheson (5 caps) and Wood […]