The former Kingsholm favourite is now a player-coach with National League One table-toppers Coventry Rugby, and when asked about his former club, Narraway admits that Gloucester’s fortunes this season are down to Ackermann’s coaching pedigree.

Ackermann has Gloucester playing with a smile again

Narraway said: “I think culturally he has made a big difference, obviously I haven’t been in the club for the last five years but hearing little bits and pieces on the grape vine and seeing where the club has finished, culturally I don’t think they have got it quite right.

“It’s a club that needs the city behind them and vice versa and once that happens you have quite a powerful beast, as I know from experience.

“He has put a lot of belief into the guys, he’s played a lot of young guys, he’s picked based on performance and not on reputation and I think that has been great for the squad.

“They are starting to see the results come through and I think maybe not this year but certainly next year it could be a good year for them.

“I have been coached under northern and southern hemisphere coaches and I have had good and bad experiences.

“He likes to throw the ball around, and I think as a coach, for me he maybe does it a little bit too much but that’s his philosophy and he’s stuck to it and you can see the guys are playing with a smile on their face and they are really enjoying it.

“I think mainly he’s come in and he has released the shackles from the guys, it seems to be a good place to go and work people are enjoying their rugby and enjoying coming into training every morning.

“That’s the main difference and that’s probably more him as a bloke than where he has coached before.”

Narraway backing Cherry and Whites for a top four finish

The 34-year-old paid tribute to the former Lions Super Rugby coach and complimented the Cherry and White’s ‘refreshing’ approach in the Aviva Premiership this season.

He said: “Not everyone is like Ackermann, I have had guys from New Zealand and South Africa that I have been coached by.

“He obviously created a magnificent brand of rugby that he nearly came to winning the Super Rugby title with the Lions and he’s brought that to Gloucester.

“He will, for sure tweak those game plans because it’s a different competition, through experience and knowing the league and knowing the players, I am sure he’ll tweak that to whatever way he sees fit but it’s quite refreshing to see.

“The Premiership has been so nutritional and based on collision and territory for so long, it’s quite refreshing to see someone coming in and doing it a little bit different.

“If it’s on to run, it doesn’t matter where you are on the field, they seem to do it. Whether that brings glory to the club, who knows but I think they will get stronger for sure in the next few years.

“I really would love them to get into the top four but I think the way the last couple of results have gone, Newcastle at home and drawing to Wasps, you know they are the sort of games that they should have been winning if they want to stay in that top four.

“I think they will probably just get pipped to it but look I think if you would have given Gloucester fans, board, players a top six finish and back in European top-flight rugby then they would have taken that at the start of the year so it’s definitely something they can go on to build from.” 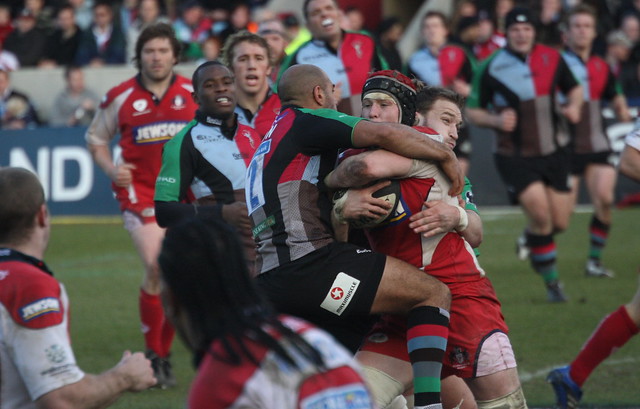 On reflection of his time at Kingsholm

When reflecting on his time at Kingsholm in a week that the Anglo-Welsh Cup final is held at the iconic West Country club’s stadium, Narraway looked back at his experiences in the Cherry and White of Gloucester.

He continued: “Gloucester is definitely up there as one of the best stadiums especially for atmosphere and when its rocking, generally on a Friday night, I remember playing Ospreys there in a Heineken Cup game which we went on to win, it was absolutely rocking.

“People are spilling out of pubs before the game, it’s a great, great atmosphere.

“I prefer a little bit more of the smaller intimate stadiums, old school stadiums that have a lot of tradition and Gloucester’s is definitely top of that list.

Narraway highlighted a couple of his prized memories at Gloucester, one of which being the 44-14 defeat to Leicester Tigers in the Premiership, despite the defeat, an enjoyable day out at head-quarters for a young outfit.

“It was better to walk out then to walk back in because we got pumped by 40 points by Leicester, and I think Deacs (Louis Deacon, Forwards Coach at Coventry Rugby) was playing in that actually”, said Narraway.

“I was a young man back then, I was 23-years-old, it probably came a bit too soon for me and the group that we had, we were kind of going through a transitional period where Dean had bled in a lot of youngsters, there was myself Anthony Allen, Ryan Lamb, Nick Wood, Olly Morgan, James Simpson-Daniel.

“We were a real young side and it probably came a year or two early for us as men but it was a great, great day out even though we lost and I think Gloucester fans always travel in their thousands and to walk out at Twickenham final even though we weren’t on the end of a good result it was a great experience for me.

“Some of my best nights in rugby came in the old Heineken Cup now the Champions Cup, has been at Gloucester and under the lights on a Friday night playing against a French team, we had a great win against Toulouse and I’ve mentioned Ospreys.

“A quarter-final that we narrowly lost to Munster back in their hay day when they went on to win it.

“They had to shut down Kingsholm Road because there were so many Munster and Gloucester fans around.

“That’s what the club needs, and they should have it on a yearly basis. I think they will have it next year and hopefully they can become a side that’s in it year in year out.”

Belief the key to Ackermann’s success

The player-coach gave his views on how far along Gloucester have developed since his time at Kingsholm.

He continued: “In the last few seasons I think they’ve finished around 8th and 9th for the last three or four years so for a club with big support like Gloucester and the money in and around the squad they should have been doing a bit better.

“With the new coaching set up and the belief that he has installed, to be in shout of a top four finish they’ve done extremely well this year.

“I think it’s just a bit of belief, and both of those things that I said about Ackermann coming in.

“He’s installed a belief into the players and to go and there and win the game instead of trying not to lose it and they have a great squad. I think they’re starting to find different ways of winning games and that’s very dangerous for anyone that comes up against them.

“Culturally I think there were a few issues at the club in the last couple of years and maybe that is from chopping and changing for a few years.

“You get a new Director’s of Rugby come in that want to try things, different techniques, they want their own players, so you get a high turnover of players. So, I think Ackermann has come in and has seen a good group of players, he’s played a good brand of rugby and I think culturally he’s got everyone to buy in.

“There will be very little turnover of players this year, maybe a couple of players leaving but no more than that and I think he will want to strengthen the current group of players and I expect them to be there or thereabouts in the top four next year.”

Ireland have lumped the pressure on England ahead of their match with France by securing a bonus-point win against Scotland in Dublin. A first-half brace from Jacob Stockdale sent Ireland on their way to victory. However, it was not as comfortable as the scoreline may suggest. Scotland squandered many opportunities to cross the whitewash themselves […]

As the Aviva Premiership returns this weekend, Gloucester Rugby can look back on a successful two weeks in the Anglo Welsh Cup. With a remarkable comeback against Saracens at Kingsholm and a narrow defeat to Northampton Saints, some of the Gloucester youngsters have given David Humphreys something to think about over the past two weeks. […]

Gloucester Rugby: Five things we learned from the win over Saracens

There’s something brewing in the air at Kingsholm. The last few years have been disappointing for the Gloucester fans, with performances not reaching the desired level and the failure to hit targets in competitions, most importantly the Premiership. But something special is happening this season. The arrival of Johan Ackermann seems to have changed not only the performances on […]