Rowland Winter’s Coventry Rugby are one bonus-point win away from a return to the Championship for the first time in ten years.

Since Coventry’s move from Coundon Road to the Butts Park Arena thirteen years ago, the club had entered a period of financial difficulty and battled to stay afloat, but with hard work from Chairman Jon Sharp and Club President Peter Rossborough building foundations at the club they now they sit one win away from a return to England’s second tier. 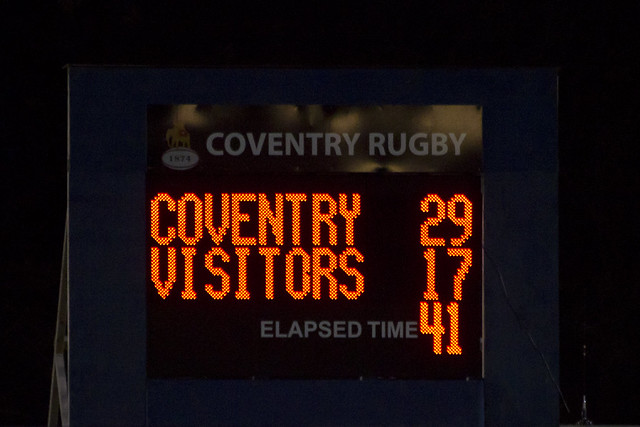 The Blue and White’s travel away to Caldy on Saturday, with a huge prize on offer if they are able to win on the road.

The Midlands-based club sit 30 points clear at the top of the table having picked up 23 wins from 24 games this season and can win the league with five games remaining.

Winter, who is in his second season with the club, has mustered a strong side that has proved too much for all but one of the sides in National League One.

With a fourth-place finish last season, the former Cambridge Director of Rugby has come on leaps and bounds in his second year, with a coaching set up of former Leicester Tigers lock Louis Deacon, former Gloucester and London Irish number 8. Luke Narraway and former England u20’s and Bath Rugby scrum-half Nick Walshe.

Watch our exclusive interview with the Coventry Director of Rugby ahead of their clash with Caldy this weekend here:

Jones has swipe at Wales coach: “Make sure he enjoys the third place play-off”

Gloucester Rugby fans will have had plenty to smile about this morning, following their side’s 22-21 Aviva Premiership victory over local rivals Bath at The Recreation Ground on Sunday. The game provided plenty of late drama as the visitors claimed their first away victory since March. Cherry and White supporters have wasted no time in […]

Fans Return To Twickenham As England Win the Autumn Nations Cup in Sudden-Death.

The first-ever Autumn Nations Cup competition has been decided after an incredibly tense final. Owen Farrell’s penalty won the match for England, in the second half of sudden-death. The Captain had the opportunity to secure the trophy with a penalty attempt early in extra-time, yet struck the post. The suspense continued for the 2,000 fans […]